I don't know what to say, Warlord Games???

Ok so I just received my order from Warlord games of the Hail Caesar Legions of Rome Big box set.  SO after waiting 2 wks for it to arrive to say I was excited was an understatement!  Well I opened the box and the excitement kinda disappeared.

The parts I was missing are as follows:

1.  4 x Scorpion and crew - eg there were NONE in the box, but were supposed to be 4
2.  1 x Aquifier was missing
3.   Heres the best part there was not a sprue of bases in the entirety of the army, thats 8 boxes of guys and NOT one sprue of bases
4.   Next missing was the shield transfers for the Auxiliary Cavalry.

On a positive note the plastic was nicely done on the rest of the army. On a not so positive note,  the first box I opened to clean up and put together, the Auxiliary Cavalry you have to see the pictures below to see crap and this is what I got on every horse in addition 2 of the horses were not entirely formed with the only thing holding some of the hoof's on were the mold connectors between the base of the model and the leg. 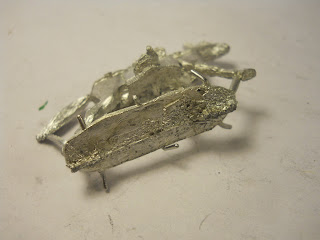 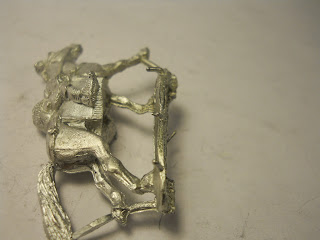 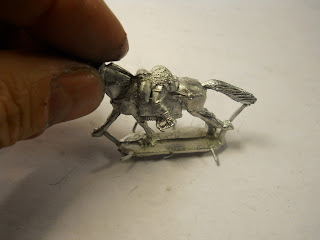 There was flash everywhere, connector pieces, slag on the bottom of the miniatures, in the last 30+ years of painting miniatures these were the worst I had worked on yet, and having already built one warlord games army, my ECW armies I was stunned.  I have sent Warlord Games several emails as I discovered stuff missing as I went and things like the missing base sprues did not register with me right away as well as the missing shield transfers.  I just hope they make good on all of this stuff and that this certainly does not happen to anyone else...  Several years ago when I had an issue with a $240.00 Battlefront FOW boxed army, the headquarters in New Zealand sent me an ENTIRE new $240.00 boxed army!!! Now that is customer service!  I am not expecting anything here as I didn't when dealing with Battlefront.  But that single act by Battlefront kept me as a customer.  Warlord Games???  We will see it is in their court now so to speak...
Posted by RazorOne223 at 13:18