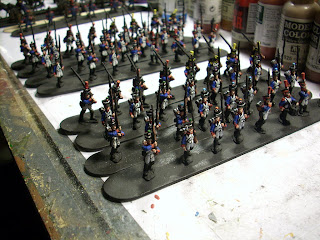 While I was working on the Titan, I was painting these guys.  This is the first 2 of 7 Regiments I have to paint along with 2 Regiments of Bavarian' s,1 Regiment of French Guard de Honour, 3 regiments of French Hussars, 1 Regiment of Polish Lancers, 1 Regiment of Cuirasiers, a bunch of  British Cavalry, some Hanoverian and Brunswick infantry as well as Artillery for both sides and then I should be ready for some gaming.  Then I can move onto painting either my 28mm ECW stuff or my 28mm Napoleonics.  Whatever strikes me when done with all the 15mm stuff.  God I will never be done!!! ;)