The last 2 15mm units I am going to do for a bit. I will be Moving onto painting my ECW stuff.

Okay so here are the last 2 units I am going to paint 15mm wise for a little while. I have kinda gotten my fill of 15mm, after having done both of my ACW armies north and south, and then British and French Napoleonics, I need to move on to doing some 25/28mm stuff.  I have been building up my ECW stuff for a bit and also have a lot of 28mm Napoleonics to paint, but I think I will work on my ECW.  I think I need to paint enough to play a game with the rules I have called 1644 by Rick Priestly.  My FLGS had some "left over" Old Glory ECW stuff laying around her shop and gave me a HUGE discount on them, I MEAN HUGE!!!  Anyway I could not resist so I think I have enough to start playing once painted up.  I really like the period of ECW, it is different from ACW and Napoleonics in both painting and gaming.  So without further ado here are the last 2 15mm units to be done for a bit. 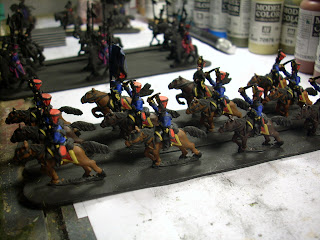 and a unit of Polish Lancers 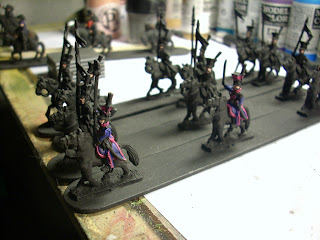