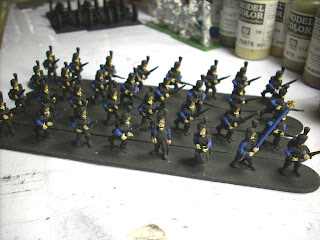 Well after finishing up the first 6 units of British infantry, I thought for balance sake and my sanity I should do some opposition.  So I thought since I had started with highlanders for the Brits, I would start with the Imperial Guard for the French, specifically the Old Guard.  I started working on these yesterday morning and had hoped to have them finished them yesterday but then my FLGS called me saying my Warlord Games sakers and 1644 came in so I had to clean those up for painting and read the rules I have chosen for my ECW gaming, 1644.  So anyway back to the Old Guard, I have the tunic base color and a highlight color done. The blue I used on the French, which I thought would be the right color, turned out to be too dark painted over the black undercoat so I had to do a hi-light color. So here is the first unit of 32 so far.