Well my 2 Warlord Games sakers just came in, I had payed for them sometime ago and they finally arrived.  On that note as I have seen no reviews on this item I thought I would do one.

Review: Warlord Games WGP-SAK-1, Saker.  Warlord games has made a model of the Saker cannon, for those of you that do not know the Saker is a renaissance era artillery piece.  The Saker used in the 17th century was capable of shooting a 5lb iron ball up to about 2,200 feet and was generally used as a siege piece, but it was also used in the field in support of troops.  Warlord Games has come out with a wonderful piece with exceptional detail to represent this field piece.  The package comes with 4 crew and the 4 piece cannon(Carriage, barrel, 2 wheels) as well as 2 resin items for "effect" one being a powder barrel and a chest.  There was only a little of clean up needed on the carriage itself and that was at the rear base where it was cut from the sprue after pouring.  The barrel itself only needed light sanding on the length to get rid of very minor mold lines, I mean very mild!  The figures all had some mold lines again very mild with the exception of the one figure rolling a barrel which had a good amount of flash.  That only seems to have been on the one blister as the same figure in the other blister did not have any. The figures themselves are wonderful!  With great detail that I am sure will be a joy to paint!  All in all I am happy with the 2 that I got, the only disappointment is the price, that being $27.00 USD per gun and crew.  They are very nicely done, but a little pricey. 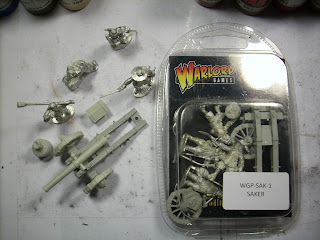 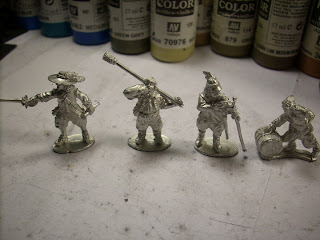 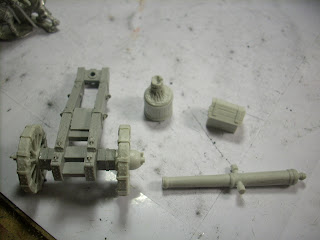