Well I have finally got my 15mm ACW collection ready for the table.  Actually I have had it ready and played 2 games with it over the last month and a half, but I would be remiss in not posting them to my blog. Most of these miniatures are Old Glory with a little Essex and Musket Miniatures thrown in for good measure. The lower 2 trays are my CSA(Confederate) troops and the upper 2 trays are my Union troops.  I guess you can tell by the pictures where my loyalties lie... LOL  I was born and raised in the south and now live in California of all places, go figure.  These armies are based for Johnny Reb III with each 4 stand block of troops being one regiment.  I still have over 1200 pcs of 15mm ACW troops still to paint, but I can see that I need to work on my union troops some more to have parity.  You will notice the black bases in the lower first tray, those are 4 more limbers I have for the Union still to paint which I just noticed are in the Confederate Infantry tray.  I guess I should move them up to the Union trays... lol  Anyway it is not much but it is a start.  I think there are about 600 figures in here and all of it painted this year! 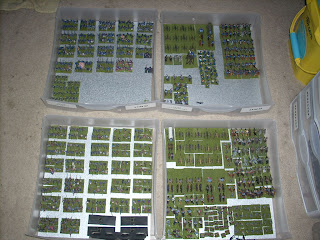