Oivay!!! This is another project I need to get back to working on...

I have been collecting these since late last year and "The 28mm Napoleonic Collection" is starting to pile up! I still do not know what to get to fill out some British Cavalry.  I have narrowed the artillery and characters that I want down to either foundry or Perry(metals).  I was hoping some company would come out with plastic British Cavalry, but I am not aware of any yet.  I am not an expert yet on uniforms for different countries and do not know if I can use the Perry French Cavalry for my Brits as well, is this historically ok?  I also plan on getting some Victrix British Flank Company infantry and also some Victrix highlanders some time this year. So far this is the list of my 28mm Plastic nappies. 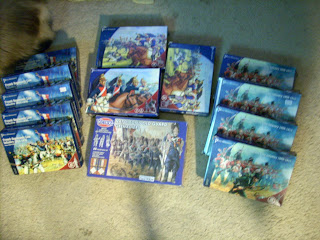 If anyone knows of a maker of plastic 28mm British Cavalry or cannon please let me know...
Posted by RazorOne223 at 15:58