Just what I need another time period and scale, this time 28mm ECW

Well I have been wanting to get into painting and playing English Civil War miniatures and games but have been putting it off due to having just too many gaming "iron's in the fire" so to speak, that is until last month's Wargames Illustrated.  The theme for last month was the English Civil War(ECW) and they 4-5 great articles and scenario's that they played and gave historical backgrounds on the ECW.   Anyway I was at my local FLGS yesterday and they had 2 boxes each of Warlord games Parliament and Royalist Infantry sets that I had been looking at for several weeks when I went in.  I also picked up Prince Rupert and The Earl of Essex also from Warlord games.  Next to order will be some Cavalry and Sakers for each as well. Anyway I have been looking rules sets for ECW over for a while as well on the net and after reading reviews on TMP and other sites it finally came down to 2 sets that I would want to try out, the first Rick Priestly's 1644(Ordered) and David Marks "PARLIAMENT, KING or GLORY" English Civil War (ECW) rules(FREE!).  I just downloaded the latter and when I have enough figures acquired and painted up I will give them a go.  Do any of you have a preference for a ECW era rules set? 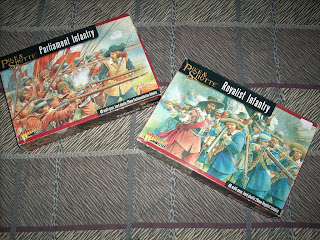