Ok so I have 3 units painted so far for my 15mm British Napoleonic army, 2 line infantry and one highlander.  They were the 28th and the 32nd and 42nd highlanders.  At first I was doing these for "Napoleon" which is for 6 bases of 4 per unit.  I then thought that having Lasalle and AOE as well that I had better make the units bigger than 6 bases of 4 figures.  Lasalle uses 32 figure units for the Brits and AOE is variable, from 4-11(4 figure) or more stands per unit. Given that I am modeling the British forces at Quatre Bras, the next units I will add to the Brits is:

With the British cavalry I am just adding units that I have pieces for at the moment and are as follows:

I have all of these primed and ready to go along with 8(at the back of the pictures) more highlanders for my 42nd to bring it up to 8 bases(32 figures). 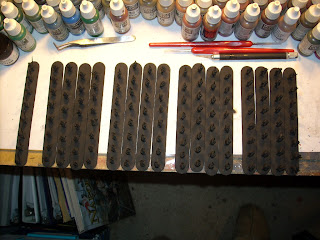 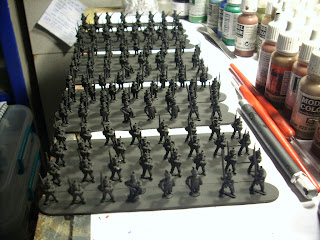