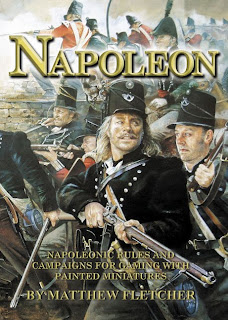 After purchasing several rules sets I could not decide on which one until now. I first started "back in the day" with playing Guarde Du Corps when you had to buy it, which my friends and I played a lot. We also played Empire III but stayed with the former. So after being out of Nappies since the mid 80's I decided to get back into it, and on the recommendation of some guys in my local club got Age of Eagles. Now while I like the support out there, and the rules are good in general, I did not like the Unit sizes. Each unit is a Brigade and the units can vary in size from 4 stands to 15 or more stands. What I did not like is that the unit was several regiments combined into the one unit with one command stand and it seemed to me no way to collect an army. So then I got Lasalle, which was a step in the "easier" direction that I was not necessarily looking for but it appeared that the units where Battalions with 2 making up a regiment, please correct me if I am wrong. Anyway while the format and presentation was nice it just did not strike me as what I was looking for. Lastly and just recently Wargames Foundry's "Napoleon" arrived and after looking at the game, how the units are presented, the historical materials and background included in the rule book, and the rules in general are just great! I am hoping to play my first game with these rules soon, but so far I have a winner "Napoleon" from Wargames Foundry. I will post more on the rules as we play.
Posted by RazorOne223 at 10:42

Email ThisBlogThis!Share to TwitterShare to FacebookShare to Pinterest
Labels: Napoleonics